Ecchi, harems, and more: 7 examples of Anime vs Reality!

No matter what your favorite genre of anime is, you have no doubt come across an ecchi anime at some point. Ecchi anime come in all sorts of genres, situations, and plot lines so they’re almost impossible to avoid. Even if an anime isn’t categorized as “ecchi,” you may still get a computer screen full of fan service you weren’t looking for.

Much like food, the customs, and everyday life is reflected in Japan, you’d expect that with the endless amounts of ecchi scenes in anime is a reflection of the way things work in Japan, however that’s not always the case. Surprising, I know!

Real life Japan is a little different from the Japan reflected in anime. While many aspects are what you’d see in Japan, ecchi is another story. What you see in anime is just not what you get in reality. Although we want to know how Japan differs from the ecchi Japan in anime, you may want to know what ecchi is exactly. 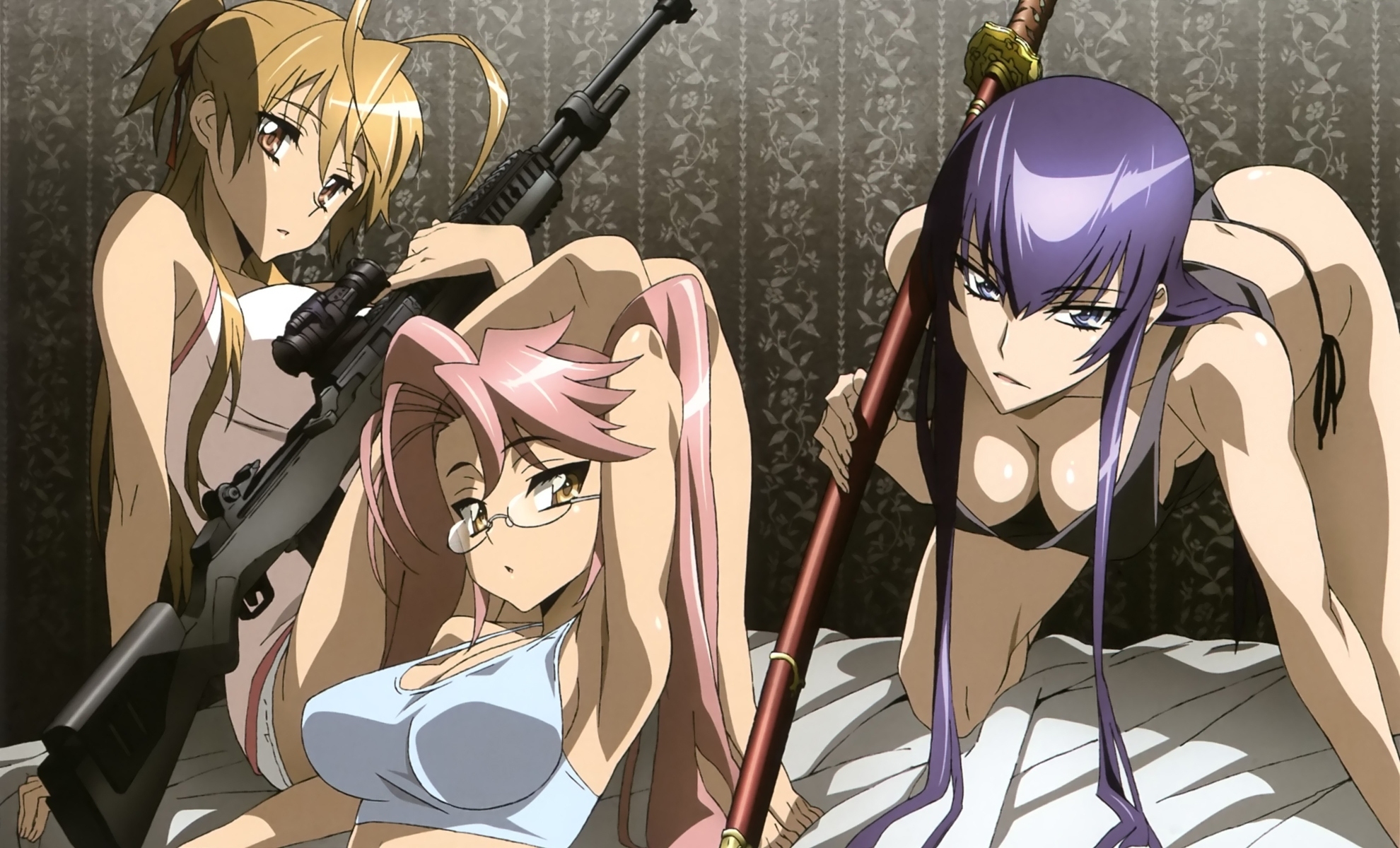 Highschool of the Dead

Ecchi Anime vs Reality in Japan The first thing you’ll notice in almost all anime are the girls with huge breasts that just can’t be contained by clothing, bras, or will power. Yup, all those anime beauties have a few more assets than just their moe features, but don’t think it’s normal! Anime girls even realize when they’re a little larger than life.

Reality: In reality, Japanese females are not known for their large breast size. If you’re looking for a bra in Japan, you’ll be hard pressed to find one that’s larger than the Japanese C-cup, which is similar to an American B-cup. You may have an occasional outlier who may surprise you, however the reality is that Japanese girls are just not known for their cup size despite what anime may have you believe. Maybe it’s a trope formed from a male animator’s fantasy or something to get anime to sell. Either way, big breasts are just not common in Japan the way it is in anime.

Despite the reality behind big boobs in anime, there’s another ecchi trope of girls groping each other and touching each other in anime. You’d expect this in yuri anime, but it’s actually quite common in anime, video games, and manga for another girl to grope another girl and remark on her breasts! In Bleach, Orihime is constantly the victim of groping at school. Despite how common this trope is, do the Japanese actually practice this or is this just more fan service?

Reality: Well, in Japan, people are more respectful of each other’s personal space. Touching isn’t extremely common unless amongst close friends and family, however even then, people do not touch when talking to each other. It should also be noted that friends of the same gender may also hold hands when walking! It’s not just for couples.

Skin as a Fashion Choice

Then there’s fashion in anime. Bare skin seems to be practically endless after boobs in any anime. Girls are generally dressed in tank tops, short shorts, and all sorts of outfits that leave little to the imagination. You’ve got plunging necklines, see-through clothing, and outfits so short that when a girl trips, somehow they’re naked. Some anime girls even walk around wearing a casual fundoshi the way Gotou Matabei does from Hyakka Ryouran: Samurai Girls! Why fantasize when you can see it all?

You’ll even find that during the winter, when people start to wear more layers and cover as much as possible, you’ll see that in anime, girls will still go out in skirts and shorts! Do they really do that in Japan?

Reality: Well, Japan is actually a conservative country, like many of its other Asian brethren. In Japan, girls will usually wear clothes that cover their shoulders at least. If you think they’re wearing see-through clothing or giving you a glimpse of something from a plunging neckline, think again! Women in Japan will layer their clothing, wearing camisoles and tank tops underneath, so don’t think you’ll be catching an eyeful of something.

For the most part, Japan is a “leg” country. That means girls will wear short skirts and short shorts to show off their legs! The length of the skirt will really differ on the trend at the time and the region the girl is from, but for the most part, girls do wear their skirts short. That doesn’t mean that panty shots are going to be as common as they are in ecchi anime! Most girls will wear gym pants or shorts under their skirts for modesty’s sake. Plus, it makes it easier to be a little reckless.

Oh God, please forgive me and my stupid imagination!

Modesty shorts are supposed to keep you safe from perverts, or chikan, but what is the reality behind chikan in Japan? In ecchi anime, it seems the perverted protagonist will always get the girl. How does that happen? Girls may call him names or get mad at him, but for the most part, he’s always the target of crushes. Take a look at Golden Boy‘s Ooe Kintarou who is a rather open, chikan who expresses himself freely and gets away with it! Even the girls who look down on him at first always end up chasing after him. Whether it’s the OAV or the manga, Kintarou seems to be the target of many affections, but he’s not the only one! Are perverts actually winners in Japan?

Reality: Ah, no, they are not. While other crimes in Japan are relatively low, sexual harassment is extremely high but under reported for a variety of reasons. Many tourists and expats will complain about how common chikan are in Japan. Chikan are also special for all the things they are willing to do as perverts. Did you know in Japan all phones have a mandatory shutter sound for the camera? That’s not to annoy you. It’s because some chikan have taken pictures under a girl’s skirt so many cell phone companies agreed to make it mandatory to have a shutter sound on all their camera phones. Many crowded train stations will, also, have a female passenger only train car for rush hour to keep women safe!

Yeah, chikan are not as welcome as you’d think, but they are plentiful and you might not want to underestimate them. Ecchi anime make perverts to be some funny idiot, but maybe they’re not as stupid as you might think.

Another ecchi anime trope is the harem. Yes, the harem where a boy becomes a man amongst a gaggle of love struck women! In many ecchi anime, the male protagonist will find himself the love interest of various moe characters for various reasons often involving his personality. It’s the type of anime that makes you think that anyone can get a date. You have characters like High School DxD‘s Issei who manages to charm everyone despite his being a chikan. There’s Yukinari from Girls Bravo who is allergic to girls yet, somehow he finds himself the attention of the affections of an entire race of girls from the moon!

Reality: Harems the stuff of dreams for most boys, but what place do they have in modern day Japan? Technically speaking, it’s not unheard of for a boy to have all female friends. It’s something that can occur anywhere. There may even be a chance at a romantic relationship, but the likelihood of all the girls liking a single boy? Not high unless he’s one of those idol types that tends to get attention.

Statistics aside, there was a report that an all girls school was opening their doors to a male student earlier in the spring. Now that boy has a high probability of having his own harem (or perhaps getting bullied). Can you feel the start of a harem anime?

For now though, leave the harems to ancient history and world leaders. You probably won’t be seeing other harems any time soon. 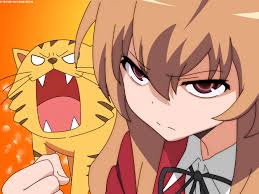 You can’t forget the strong women in harems, though! Girls in ecchi anime can have a lot of spunk and personality. They can be quite rough around the edges and stubborn as well. Of course, not all of the characters have this type of personality because frankly, that would be boring, but they do seem quite prominent in anime, don’t they? Girls have attitude, wilfulness, and charisma, but what is the reality of this in Japan?

Reality: Actually, Japanese women have a wide array of responsibilities. They are in charge of keeping track of the household finances, work their own jobs, prepare the meals, do the household chores, and take care of the family. Included in all that, Japanese women will also commandeer the household chores to ensure everyone is pulling their weight and getting it done properly! With that, you can bet that women in Japan are strong with a lot of personality with all of that hard work involved! It takes just that much to hold the family together! While each woman has their own personality and characteristics, you know that of course they’re strong based on everything they have to do, but since they are so strong. So we can say that anime may show them as stubborn and willful, but in reality they are much stronger in reality than any anime can show.

Lastly, there’s this idea that mixed onsen are common in anime or that there is a possibility of girls accidentally bathing with boys at the onsen. It’s the stuff of fantasies because what male wouldn’t want to bathe with naked girls? In anime ecchi anime, harem anime, and even slice of life anime will feature at least one onsen episode. In most cases, there’ll be some sort of mishap where two people of opposite genders can accidentally share the same bath or see the other side. What a fantasy that would be right?

Reality: If you were to look for mixed onsen in Japan, you may find that there are a few options in various parts of Japan to engage in mixed bathing. This allows families to bathe together. In some mixed onsen, it is required to wear bathing suits, however the situation may just depend on the location of the onsen. While mixed onsen may not be prominent, it is safe to say that mixed bathing is one ecchi situation that truly exists in reality!

Ecchi anime will have you believe a lot of things about Japan today, but hopefully this article cleared up a few misconceptions caused by ecchi anime. Japan is a country like no other with many facets that we can only hope to crack the surface of by watching anime. Anime can only show us so much!

Now, what other ecchi anime tropes are you curious about?